Video Game / We Become What We Behold

Due to the game's small size, all spoilers are unmarked. You have been warned. 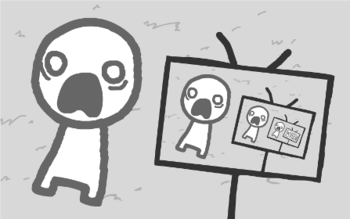 News cycles. Vicious cycles. Infinite cycles.
We Become What We Behold is a video game created by Nutcase Nightmare, released on Kongregate in 2016. It's a Deconstruction Game where you work as a photographer for an unnamed social media network and must take picture of interesting things to make them go viral. It starts off innocently, but it really functions as a satire of the internet/modern media cycle.
Advertisement:

You can play it here

. It's recommended to do so before reading the trope list, since it is rather short.

We trope what we behold: