Video Game / Nothing to Hide 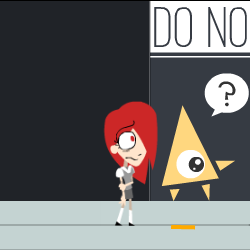 You've got nothing to hide, don't you?
Meet Citizen Number Something. Citizen Something helps our country spy on our enemies, such as citizens like herself. Aha! She almost walked out of sight of our high-tech spy-tech, but she goes back and corrects the situation. Hide from the cameras like a criminal? Hahaha, wouldn't that be something...
—The Gameplay Trailer

is a 'Anti-Stealth' game by Nicky Case AKA NutcaseNightmare. The game's premise is simple; you play a teenage girl called Poppy Gardener in a dystopian future United States in which everyone is constantly watched by the government. In this future, devices called the iEye watch people and you must be in sight of the cameras at all times. If you step out of sight even briefly you will be "tranquilized", because only criminals would go out of the sight of cameras as only criminals have something to hide. Every moment is also put up onto a Facebook-like knock-off called "The Wall", whether or not you wanted to. However, what happens to Poppy herself depends on the game version.

In the demo, Poppy Gardener is the daughter of the president, who is in complete control of the US and the upcoming unsecret ballot (which, like everything, is revealed to everyone) will win him another term. His daughter, who you could say suffers the most, decides to run away in order to escape, despite needing to be watched by the iEyes at all times. She eventually comes across Nobody, a young boy and rebel who found a way to remove himself from the The Wall, and with an app he created, Poppy too becomes "nobody".

In the originally planned game, the story is flipped around. Here, Poppy is instead the daughter of a poor man who has his and his daughter's life turned into a DomCom against their will, allowing anyone at any time to tune in and see their horrible life. To earn privacy, one must be incredibly powerful, and the story will focus on Poppy basically having a Downer Ending as she will lose everything.

However, the development of the game has been unfortunately

stopped. (Though the creator states they do intend to make the game, it won't be anything like what was planned.)

This video game includes examples of: