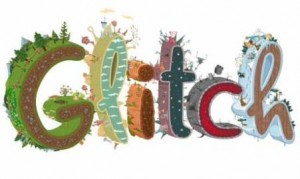 Glitch was a browser-based MMO game billed as a "Game of Giant Imagination." It was set in the world of Ur, which was imagined into existence by a group of eleven Giants. The Giants, in turn, imagined doll-like beings called Glitches (or Glitchen), who were the player characters. Ur contained a variety of opportunities and challenges. Glitch was conceptualized as 'an online game with no fighting,' and had elaborate crafting, cooking, and creating mechanics. Most of the game was focused on interaction, finding stuff, making stuff out of other stuff, and exploring the world. There were, however, whispered rumors of a threat to imagination itself, and after a certain series of quests Glitchen could educate themselves on that problem and defend Ur from it.

The game could be played with a mouse and keyboard, and was built in Adobe Flash by the company Tiny Speck. The entire world of Ur was persistent and could be changed in a variety of ways. For example, an Egg Plant one Glitch planted in a public place could be harvested, watered, petted, or poisoned by any other player.

Glitch shut down on December 9, 2012 due to limited audience appeal, but the art, animations and client code have been released by the developers into the public domain, which can be found here

. Additionally, in December 2014 fans of Glitch began a project to relaunch Glitch under the name Eleven Giants

, retaining many of the original's gameplay features and mechanics.