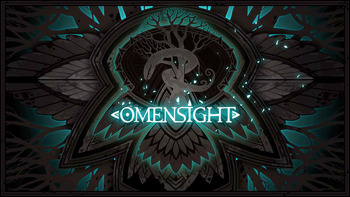 Omensight is a game developed by Spearhead Games released on May 15, 2018, for PlayStation 4, XBox One and Steam. It is a Spiritual Successor to Stories: Path of Destinies.

War is brewing between the Pygarian Empire and Rodentia who wish to be free from their rule. During this bloody war, the one person who could have mediated a truce, the Godless Priestess Vera, is murdered in cold blood.

On the day of the battle between Pygaria and Rodentia, the Harbinger, champion of the gods and sign that the end is upon the world, appears to investigate what went wrong before the great beast Voden destroys the world.

This game consists examples of: