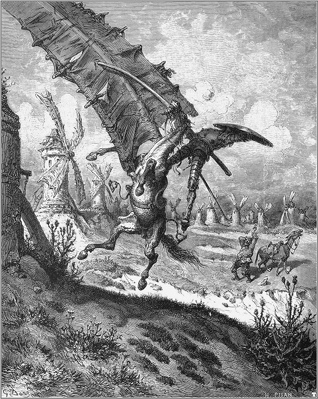 Man of La Mancha
"I would your worship take notice," replied Sancho, "that those you see yonder are no giants, but wind-mills; and what seem arms to you, are sails; which being turned with the wind, make the millstone work."
— Don Quixote, chapter XIII
Advertisement:

This character is a hero, fighting the good fight and defending the innocent from the forces of evil. Not everyone understands the nature of their struggle — in fact, many decry them as being insane — but if only they knew what the hero knew then they would understand that their goals are noble and their methods perfectly justifiable (if a little extreme). There's only one problem:

The struggle is imaginary.

There is no struggle. There are no enemies. No-one needs to be saved. They're doing what they "have to do" to save people from a threat that doesn't exist.

The Trope Namer is Don Quixote, a crazy old man who wanted to be a heroic knight but had zero knowledge of what knights actually were, thanks to being born several centuries too late. He saw some windmills and believed that they were actually evil giants, and set off to attack them, in the most famous scene of the novel.

A Windmill Crusader is not a Straw Hypocrite: While he might be a Heteronormative Crusader or Principles Zealot, he is not a dishonest person who will try to trick people into a struggle against windmills for the greater good. No, he honestly and wholeheartedly believes the windmills are giants and is desperately trying to save everyone from this non-existent threat.

So, why did he mistake windmills for giants in the first place? Well... maybe he's crazy, maybe someone gave him misinformation that he didn't check up enough, maybe he's interpreting something incorrectly, or maybe he blindly believes some religious or ideological dogma.

Might suffer from Black-and-White Insanity or Aggressive Categorism, and is likely to do Activist Fundamentalist Antics.

Compare Conspiracy Theorist and Zombie Advocate. Contrast Lord Error-Prone for someone who makes a lot of little mistakes rather than one huge fundamental misconception.