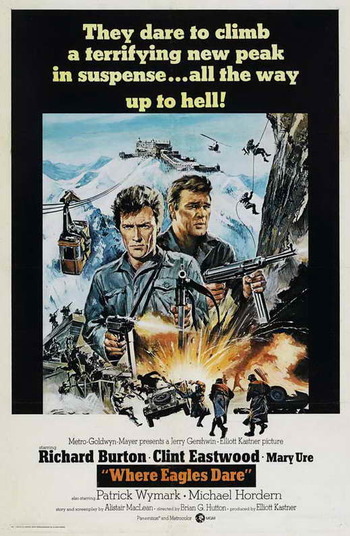 Where Eagles Dare is a seminal 1967 novel by Alistair MacLean (who also wrote The Guns of Navarone). The following year it was made into an action thriller film directed by Brian G. Hutton and starring Richard Burton, Clint Eastwood, Mary Ure, Patrick Wymark, Michael Hordern, Donald Houston, and Ingrid Pitt. It follows in the footsteps of The Dirty Dozen and The Guns of Navarone as part of a new trend in war movies toward eschewing historical accuracy in favor of flashy mowing-down-Nazis action and a high "Holy Shit!" Quotient, the better to appeal to a younger generation of moviegoers.

The plot: during World War II, seven Allied commandos are dropped behind enemy lines in the German Alps, ostensibly to find and rescue a captured American general who's a key player in the plans for D-Day. However, after two of the group's members are killed and the local Nazis are alerted to their presence, it becomes clear to them—and the viewer—that there's a traitor in their midst. Is everyone in the team who they appear to be? No. Can the team accomplish their mission against all odds? Just watch 'em. And how many Nazis can be killed in just one castle anyway? A lot.

(Although that missed a few.)

As with any film involving shady deals and double crossing, spoilers ahead.