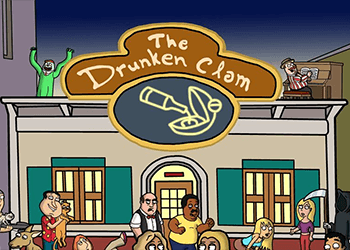 Don't ask how a sea creature can drink, it's just a name.
"But the only brew
For the brave and true
Comes from the Green Dragon!"
— Merry & Pippin, The Lord of the Rings: The Return of the King
Advertisement:

There are several trends in naming bars and inns, but among the more interesting ones, particularly in High Fantasy, is the tendency to name it after an animal, specifically in the form of... "The Adjective Animal." Extra points for alliteration and/or a present participle (that is, an adjective derived from a verb by adding "-ing"). It often also involves colors: White Hart, Red (or Golden) Lion, White Horse, Black Bull.

There are several other naming conventions for pubs. Either describe an animal in a different grammatical form (such as The Hog's Head, from Harry Potter, from the barrel volume hogshead and the UK pub chain of the same name) or have "The Adjective Noun," without referring to an animal (such as The Salty Spitoon, from SpongeBob SquarePants) or linking two random nouns with a "&" (Elephant & Castle).

This is Older Than Print, going back to the European High Middle Ages. You obviously wanted your pub to have a name, so people can say "Join me at Alice's Tavern," instead of Bob's Tavern down the path. But since literacy was much less common back then, just writing "Alice's Tavern" on a sign would likely lead to someone not knowing that you've got a pub here. Instead, you'd paint a picture of, say, a red duck on the sign, and then people could say "Meet me at the sign of the Red Duck."note This remains useful today for those who cannot read, such as those who just got quite drunk and now need to call a taxi.

This pattern was reinforced by the way that from the middle ages until the 18th century most houses in European cities and towns — not just those that housed an inn or tavern — were named after such a sign because nobody had yet thought of numbering houses.

The "animal" can also be a monster— this is particularly popular in fantasy settings to show the difference in what creatures people consider familiar. They don't actually have to be "real," though; dragons and unicorns are popular creatures for this trope right here in the real world. In futuristic/space settings it can include aliens, too. Compare Color Animal Codename, for when a character or group of characters use a color as the adjective for their animal aliases.