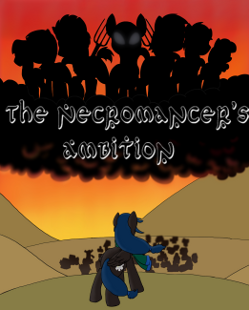 .
Trouble. It follows me around like an unwanted pet. The kind of pet liable to maul my friends' faces.
— Dusky Down, from the description of From Dusk to Night

The Duskyverse is a My Little Pony: Friendship Is Magic fanfiction series by Kuroi Tsubasa Tenshi

), mainly focusing on the traveling pegasus, Dusky Down.