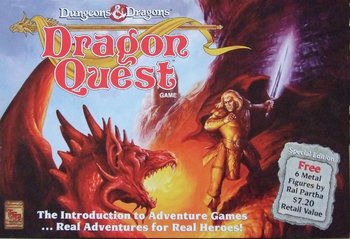 Not that Dragon Quest
Advertisement:

DragonQuest is a fantasy tabletop game first published by Simulations Publications (SPI) in 1980. It was designed by Eric Goldberg, Gerard C. Klug, Davud James Ritchie, Edqard J., Woods, and Redmond A. Simonsen, and was one of the first games to emphasize skills rather than character classes, allowing players greater freedom in customizing their characters. Any character may learn any skill in this game, while vocations may be acquired by spending experience points.

The original working title was Dragonslayer, but it had to be changed to avoid a conflict with the Disney movie of the same name. In 1981, SPI published a board game called Dragonslayer as a movie tie-in. In a hilarious turn of irony, the DragonQuest trademark that SPI thus gained kept the unrelated Dragon Quest series of video games from being published in North America under that title in turn; the video game was thus retitled Dragon Warrior for the North American Market.

After the first edition of the game was published in 1980, a second edition was published by SPI and Bantam Books in 1982, while a third edition was published by TSR after they acquired SPI; the game's final print run was made in 1989 (and TSR then produced a "Dragon Quest" boxed starter set in a similar board game format for its flagship Dungeons & Dragons game in 1990). As of the new millenium, the game belongs to Wizards of the Coast, though WotC's abandonment of the trademark of the name has left Square Enix free to publish Dragon Quest video games under their original name in North America.