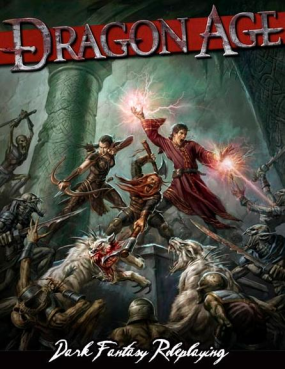 The original Set 1 cover
The Tabletop RPG adaptation of the Dragon Age role-playing video game series, designed by Chris Pramas and published by Green Ronin in 2009. The players take on the roles of the warriors, rogues, and mages in a darkly Heroic Fantasy world of Thedas. The game was originally published in three sets, for character levels 1-5, 6-10, and 11-20, respectively, before a Core Rulebook

was released in August 2015.
Advertisement:

The game's core mechanic, similar to that of the d20 System, is to roll a GURPS-like 3d6 (three six-sided dice), add the ability score and skill modifiers, and compare the result to the target difficulty score. One unique aspect of dice-rolling in DA is the so-called "dragon die"—a die that is colored differently from the other two. When doubles turn up on a roll, the dragon die's value determines the number of "stunt points" that the player can use to enhance their action on that roll, such as combat maneuvers or extra spell effects. Its value can also determine the degree of success on certain rolls, including acting as a tiebreaker.

The game system itself provides examples of following tropes: