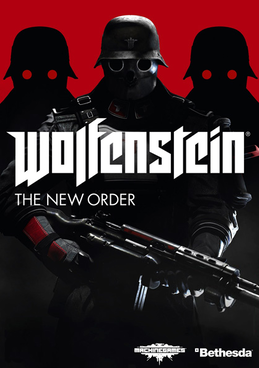 "While I was gone, they set the world on fire. It wasn't a war anymore: it was a remaking. Some losses are inevitable. Some... unthinkable. Now they've built a new world. Armies of steel and thunder. They're rewriting history. But they forgot about me."
— B.J. Blazkowicz, announcement trailer

Wolfenstein: The New Order is the fourth entrynote sixth if you also include Castle Wolfenstein and Beyond Castle Wolfenstein in the Wolfenstein series, developed by MachineGames, a studio founded by several key members of Starbreeze Studios (developers of The Darkness, Escape from Butcher Bay, and Assault on Dark Athena) who left in 2009.

It is 1946, and the Allies are losing World War II thanks to a sudden technological leap made by the Nazi regime. B.J. Blazkowicz is sent on a secret mission to assassinate the man responsible for this: Wilhelm "Deathshead" Strasse. Unfortunately, the mission goes horribly wrong. B.J. barely escapes alive and suffers head trauma in the process, and spends the next fourteen years in an insane asylum. Come 1960, Blazkowicz awakens only to find that the worst has happened: the Nazis have won the war and now rule the world with their incredibly advanced technology. Blazkowicz joins a La Résistance group, the Kreisau Circle, in Berlin in an attempt to make things right... but how can he win a war that's already been lost?

Check the character sheet. Not to be confused with the seminal British indie band or the Hearts of Iron IV mod with a similar concept