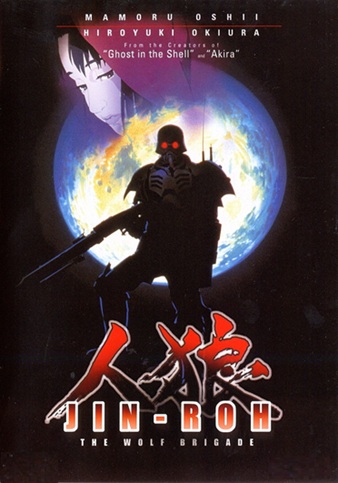 "We aren't men disguised as mere dogs. We're wolves disguised as mere men."
And at that, the wolf pounced upon the girl and devoured her, rending apart her flesh and bone, eating her alive, ignoring her screams.
— Rotkäppchen
Advertisement:

Jin-Roh: The Wolf Brigade is the third and final film of Mamoru Oshii's Kerberos Saga, which was released on November 17, 1999 in France, and on June 3, 2000 in Japan. It is also the only animated film in the series, the animation done by Production I.G. It was directed by Hiroyuki Okiura and written by Oshii.

The main character is Kazuki Fuse (Yoshikatsu Fujiki), a member of a heavily armed special forces unit (Kerberos) of the police. At the beginning of the film he witnesses the desperate suicide of a young girl who was delivering explosives to an anti-government riot. The suicide bomb cuts power lines causing a large blackout; as a result the police lose control of the situation and Fuse gets into trouble with the brass as he could've prevented this by shooting the girl. The audience is then introduced to a power war going on behind the scenes, between the police unit Fuse is part of and a rival entity called Public Security. Later on, Fuse meets Kei Amemiya (Sumi Mutoh) who looks like the dead girl and claims to be her older sister. Is it the truth, or is she hiding something? Despite his suspicions, Fuse doesn't reject her company.

The film's title "Jin-Roh" note literally, "Man-Wolf" comes from a rumored counterintelligence cell operating inside Kerberos itself as it slowly builds up to be an important part of the story.

Unlike two of the earlier films in the series, The Red Spectacles and StrayDog: Kerberos Panzer Cops, which were original stories, Jin-Roh is a very loose adaptation of the Kerberos Panzer Cops manga. Most of the characters have been renamed, reimagined or removed entirely and the plot has been compressed and simplified to fit a movie that lasts less than two hours.

Somewhat jarringly for a cynical political drama, Jin-Roh is mostly remembered for the impressive and menacing heavy armor worn by Fuse. It is often confused with the armor worn by the Helghast faction in the First-Person Shooter Killzone (which it possibly inspired).

The film was licensed and dubbed by Bandai Entertainment for a DVD release, but said release went out of print when the company ceased production. Discotek Media has since rescued the movie for a future DVD release. A Korean Live action remake of the movie titled Ilang: The Wolf Brigade was released in 2018 and directed by Kim Jee-woon.

Released in the Kerberos film trilogynote chronologically with StrayDog: Kerberos Panzer Cops and The Red Spectacles.