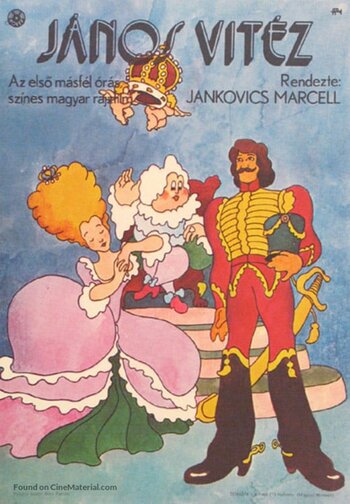 János vitéz (Johnny Corncob) is a 1973 animated musical adventure epic directed by Marcell Jankovics, and the first ever Hungarian animated feature. One of the many adaptations of Sándor Petőfi's 1845 epic poem of the same name (known as John the Valiant in English), it was produced to commemorate the 150th anniversary of the poet's birth. Fittingly, all of the dialogue is written in verse.

The story follows the titular Kukorica Jancsi (Johnny Corncob or Johnny Grain o'Corn in the poem), an orphan shepherd banished from his home and separated from his sweetheart Iluska (Nelly). With nothing to live for, he joins the hussar cavalry on a campaign across bizarre version of Europe to liberate France from the Turks. He returns home only to find Nelly dead, which prompts him to set off into magical lands and face miraculous challenges to reunite with her beyond the End of the World.

Much like the director's later and more internationally famous Son of the White Horse, the film displays bright, creative and oftentimes very abstract animation, loads of symbolism and some suggestive content. Though this time there's an added pop-art flair, as the visual style is a direct copy of the Cult Classic Yellow Submarine, right down to the distinctive character designs. The traditional folk-music inspired soundtrack features songs by Hungarian-Greek singer Gjon Delhusa, with lyrics by famous playwright and rhyme-master József Romhányi.

Partially due to its significance, popular source material and political backing, the film was an enormous success in its home country, though it remains little-known elsewhere.