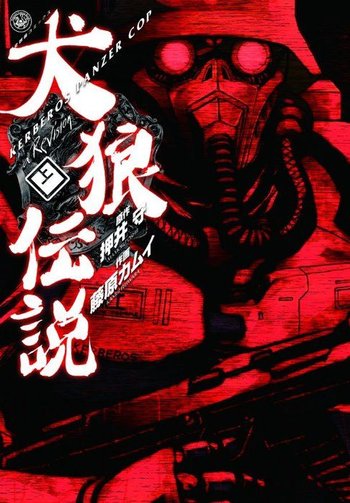 Kerberos Panzer Cop (犬狼伝説 Kenrō Densetsu) is a two volume Science Fiction Diesel Punk manga written by Mamoru Oshii and illustrated by Kamui Fujiwara that ran in Shonen Ace magazine from 1988 to 2000. It's the first manga in Mamoru Oshii's Kerberos Saga and serves as a prequel for The Red Spectacles and StrayDog: Kerberos Panzer Cops.

The story follows the downfall of the titular Kerberos unit as their overzealous actions as well as internal sabotage and vicious Interservice Rivalry lead to their demise. The story is followed from the perspective of several different characters, but it mainly focuses on the "Devil's Trio" of Kōichi Todome, Washio Midori and Sōichirō Toribe as they tackle the anti-government extremists that run rampant on the streets.

A sequel called Kerberos Saga Rainy Dogs ran on Ace Tokunoh magazine from 2003 to 2004 and followed the immediate aftermath of the Kerberos riot and Kōichi's escape from the country.

A Remaster of the manga was published in April 2010 to commemorate the release of the manga's first volume in 1990 under the title Kerberos Panzer Cop a Revision : 20th edition and featured digitally improved graphics of Kamui Fujiwara's art.

The first four acts of the manga were published by Dark Horse Comics in english under the title Hellhounds: Panzer Cops in 1994 and was also published by Diamond Comic Distributors in the UK in 1998. This translation renamed and removed all references to real locations or political entities from the story.