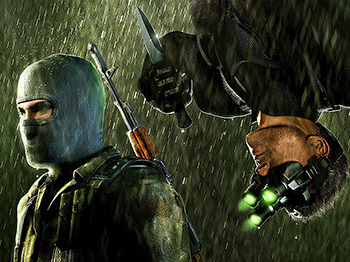 Lady Roberta: I understand, Havelock, that you scored zero in your examination for stealthy movement? ... And you never attended his lessons, he said.
Vetinari: Oh, I did. Religiously.
Lady Roberta: He says he never saw you at any of them.
Vetinari: And your point, Madam, is...?
— Night Watch
Advertisement:

Someone who is very good at remaining hidden. Security cameras? No problem. Camouflage? Got it covered. Usually they will have some sort of tranquilizers or equipment to jam electronics. In a wartime setting you will often find one of these.note Well, you won't actually find them, but you get the idea These people have stealth down to an art form, normally outclassing anyone in real life. It is also wise to assume that snipers qualify here as well.

This ability often enables them to infiltrate areas while dressed in a ridiculously conspicuous costume, rather than using camouflage like a normal sane human being. If done too much, it may break the Willing Suspension of Disbelief. Some stealth experts are also Masters Of Disguise, although they do not use this skill as often as the audience might expect. They're often capable of Stealth Hi/Bye and Offscreen Teleportation.

For obvious reasons, the protagonist of a Stealth-Based Game will usually be one of these. Also figures in Combat, Diplomacy, Stealth situations.

Supertrope of Stealthy Cephalopod, when this applies to octopuses or other cephalopods. Compare The Sneaky Guy, who might or might not use stealth. Ninjas are Stealth Experts, or not. Contrast the stealth expert's mortal enemy, The Anticipator. Stealthy Colossus is this taken to its logical extreme, when someone who should not be able to hide their bulk is still quite good at doing so.

Master thief Kasumi Goto is *very* fond of sneaking about while cloaked, as this mission intro indicates - to the point that she spends most of the following mission completely invisible.

Master thief Kasumi Goto is *very* fond of sneaking about while cloaked, as this mission intro indicates - to the point that she spends most of the following mission completely invisible.