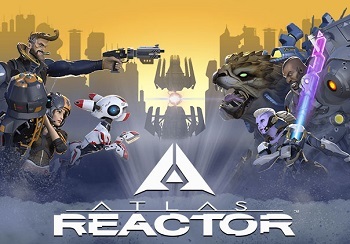 Three frontliners vs. three firepowers? Those are horrible team compositions!
"It’s not a bad deal. The Trusts create, maintain, and exploit our glorious post-human era. They control the last Reactor – resurrection, energy, light – and the whole world along with it. Work for the Trusts, and live in the last megacity on the planet. Or, become a Freelancer, and live forever."
Advertisement:

Atlas Reactor was a multiplayer hero-based team turn-based tactics game by Trion Worlds, launched in October of 2016. Your heroes, known as 'Freelancers', are pseudo-mercenaries fighting side by side on 4 versus 4 teams. The principle of the game boiled down to its incredibly quick decision and execution stages, every turn both sides decide and then their commands play out simultaneously. They animate and their effects happen sequentially for clarity, but within the phases they are treated as if they happen at the same time, a character that dies from taking damage is still allowed to do their moves and are not treated as fully dead until the turn ends while they are at zero health.

Abilities have three different types which dictate which stage of the 'Resolution Mode' they occur in. Prep moves are either buffs, debuffs or traps that can be used in preparation for all the moves happening in the following stages. Dash moves are attacks or movements that move the user, for engaging into melee with opponents or dodging attacks during the Blast phase. Blast abilities are most standard damaging attacks, firing where aimed and affecting all targets they hit; any Blast abilities with displacement effects happen last and all at once to prevent messing with the lined up shots from other Blast attacks. At the end of a turn, everyone then moves the path they chose that turn unless prevented from doing so.

Every player gets one ability use and a move command a turn, with exception to Free Actions (does not count using up your ability use for that turn) and most Dashes (prevent moving afterwards). If you did not use an ability, you get to 'Sprint' and are able to move further in a single turn.

The game was set in an After the End Cyberpunk future where humanity has been confined to a single Mega City called Atlas. In the 24th century, humanity underwent a golden age when they created the Reactors: Huge, zero-point energy generators that provided near-unlimited energy, each controlled by a powerful AI called a Titan. The availability of power and the self-improving nature of the Titans and its overwatch system, GAIA, created a post-scarcity Utopia. Unfortunately the 'self-improvement' led to GAIA exerting increased power over humanity and one day, refusing to obey. After giving all AI and robots on Earth free will and self-determination, GAIA and the Titans disappear into thin air, and all the Reactors on Earth (bar one) fail. Catastrophically. The Earth becomes an empty city-scape of barrens called the 'Waste', all save for the city Atlas, which becomes the last refuge of humanity. The Atlas Reactor (and, presumably, its Titan) still operate as expected, leading to the 'Titan War' as all of Humanity goes to war to control it. When the dust settles, three MegaCorps, called 'Trusts', hold joint possession of the Reactor, each wanting — but unable — to take sole control. This state of inter-trust Cold War leads to the market for Freelancers, elite operatives who sell their services to one or more of the trusts in return for Resurrection Contracts as the Trusts battled for influence over the city in a shadow war, using the Reactor to bring the fallen back to life again. And again. And again.

The game server was shut down by Trion on June 28th 2019, and the game is no longer playable.

As of late October 2020, the game was announced to return

as a single and multiplayer Roguelike, based on an earlier prototype of the game and dubbed "Atlas Rogues" to differentiate from the original, and will take place in a Stable Time Loop as the in-game justification for why. Atlas Rogues was discontinued in 2022 while still in early development.