Throw Down the Bomblet 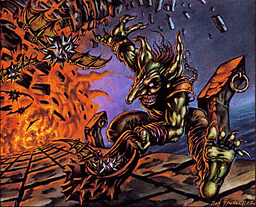 Heheheheh. Boom.
"Explosive weapons are best used when dealing with crowds or in situations where precision is not a high priority."
— Fallout: New Vegas loading screen.
Advertisement:

When it comes to Fiction, nearly every weapon can be found as a Weapon of Choice. They can range from the wildly improbable or impractical to the mundane. Somewhere in-between these lie those who use thrown explosives and incendiaries as a weapon of choice.

A person who wields grenades as a weapon of choice will frequently be portrayed as having poor impulse control. They may feel about explosions the same way a Pyromaniac feels about fire. As such, this trope frequently overlaps with Mad Bomber. They may also have a "fiery" or carefree personality. Oddly, there are a small number of grenadiers who are coldly logical and controlled in temperament, perhaps to contrast their fiery and out-of-control weapons. Usually, they favor Grenade Tag for the calculated subterfuge.

In reality, grenades and their ilk are dangerous, unpredictable weapons that are reserved for specific situations where they aren't likely to cause collateral damage. However, in fictionland they can frequently be thrown at any enemy, regardless of range or surroundings, without fear of injury to oneself or one's allies.note This tension may in fact explain both of the frequently seen personality types. Explosives are messy, dangerous weapons that require a great deal of care and precision to use effectively, and so impulsive bombers reflect on the mercurial nature of the explosives themselves, while calculating ones are more representative of actual demolitions experts.

This trope will usually only show up in settings that have sufficient technology for thrown explosives to exist, although this isn't always the case.

This trope always results in Stuff Blowing Up and may be PG Explosives. See Molotov Cocktail for one specific type of weapon this person might use. See also Hey, Catch! and Catch and Return. If the explosives come from superpowers instead of mundane objects, it's Having a Blast. Grenade Spam is the equivalent for video game mechanics.

Alternative Title(s): Throw Down The Bomblette