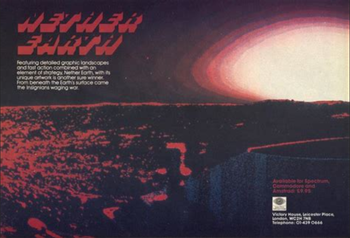 Nether Earth is an 8-bit isometric Real-Time Strategy game created in 1987 by Icon Design Ltd for ZX Spectrum, Commodore 64 and Amstrad CPC and published by Argus Press Software Ltd. It is often referred to as one of the founders (if not the founder) of the RTS genre.

Mysterious aliens — Insignians — plan to conquer Earth. They built a number of factories and warbases on an asteroid. Factories make components, bases assemble them into robots. What's unusual, is that Insignian military controls only the warbases, but the factories are owned and operated by private contractors, who sell components to the military. That's their weakness.

Fortunately, Earth forces were able to capture one of the warbases and Earth managed to raise several "space dollars". You must buy robot parts, assemble robots and capture other 3 warbases. Earth will send more money, but not enough. Capturing the factories that make robot parts is a cheaper way of building your army. To do so, park your robot in the factory entrance long enough (12 game hours) to declare a martial law, thus capturing the factory. Unfortunately, after you arrive, Insignian military starts capturing neutral factories too. But fear not: the corrupt Insignians will still sell you components, even if all factories are held by the enemy.

You are piloting an invincible "command module", that can fly anywhere on the map. To access a robot assembling menu land on the roof of your warbase. To reprogram your robot or to directly pilot it land on the robot.

Robots can walk around the field following simple programs (e.g. "Find and capture neutral factories", "Find and destroy enemy robots", "Advance 9 miles"). Or you can control 1 of them directly.

There were several unofficial remakes: