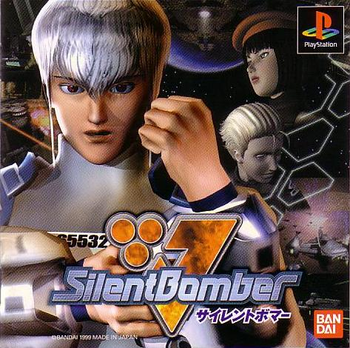 Louder than you'd think.
"Seven years ago, on a battlefield...I lost what I believed in. Each time I went into battle, another piece of my soul died. I'm a mere shell of a man now. Nothing more than a killing machine."
— Jutah Fate
"So we're merely pawns in an elaborate game that will decide the fate of the world, is that it? Then which player will be fortunate enough to checkmate fate I wonder?"
— Benoit Manderubrot
Advertisement:

Silent Bomber was the second game developed by CyberConnect2 (best known for developing the .hack series and Naruto Ultimate Ninja Storm) and was released in April 1999. Something of an underrated gem, Silent Bomber is an unrelentingly fast and responsive action platformer with overtones of the classic shoot'em up genre.

The plot follows the exploits of Jutah Fate, an incredibly deadly genetically engineered futuristic explosives expert and war criminal. Jutah is a specialist in use of the E-Unit Gauntlets, an implausibly awesome weapon system that allows its wielder not only to set powerful bombs, but also to launch explosives with pinpoint accuracy at targets from afar and detonate on command. An emotionally dead man as a result of the atrocities for which he has committed and been imprisoned, Jutah is press-ganged into serving in a penal squadron by his incarcerators: the government of the peaceful world of Hornet. Specifically, Hornet needs him to prevent their immanent destruction at the hands of none other than the planet Earth, from whom they have recently declared sovereignty. Thus he undertakes a neigh-impossible mission to destroy a colossal battle cruiser that is poised to destroy Hornet, surrounded on all sides by comrades he doesn't care for, led by incompetent orders and facing what is probably the deadliest force in known space.

It's cool though. He's got this.

The combat system is the game's real draw: as Jutah eschews the use of anything other than explosives, his entire fighting style demands that the player races around areas as quickly as possible, setting bombs on weak points in enemy fortifications and detonating them the moment he gets clear so that he can set up the next volley of incendiaries, all the while dodging storms of ordnance from all angles. He isn't left wanting for ranged attacks either; the E-Unit has an auto-locking system for launching bombs on to foes at long range, allowing him to take down even the nippiest of adversaries. What's more, his bombs can be stacked on top of each other to increase the damage they cause and the radius they effect. When you add to this three different kinds of special liquid explosives that can also be stacked to glean deadlier effects (Lightning Black Hole ON FIRE ATTACK!}, an RPG leveling system that has you choose your favored advantages carefully, some of the best graphics the PS1 has to offer and an unlockable fighting mode that lets you and a friend play as the bosses against each other, and you have a vastly underrated classic on your hands.

Silent Bomber is available through the Playstation Network in some regions, but can be tricky to find otherwise.