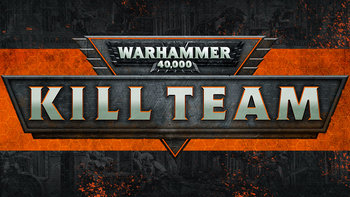 Deep behind enemy lines, outnumbered, unsupported & running out of time...
One blade, driven into the correct heart, at the right moment, will save or slay a world as surely as the firepower of entire armies
Warmaster Hokaeto, Supreme Imperial Commander, Desmaxian Crusade
Advertisement:

Warhammer 40,000: Kill Team is a squad sized skirmish Gaiden Game that sees small units of elite warriors battle each other while attempting to complete covert missions.

There have been a number of different versions of the Kill Team rules over the years, beginning with a short set of alternate rules in the 4th Edition Warhammer 40,000 Rulebook that altered the core game's rules for the smaller skirmish-based battles. When 4th Edition was updated to 5th Edition, the Kill Team rules were removed but a number of events adapted their own Kill Team rules. In 2016 Kill Team received its first boxed game release that used the 7th Edition Warhammer 40,000 rules as a base with alterations included in the box set's supplemental rulebook. 2018 saw the release of the first standalone Kill Team game that based its rules on the 8th Edition of Warhammer 40,000 but included them in its own full Core Manual. The 2018 version of the game has received a number of supplements of its own including Kill Team: Rogue Trader and Kill Team: Commanders in 2018, and the competitive gaming expansion Kill Team: Arena released in 2019.

Kill Team takes place in the Warhammer 40,000 setting and follows the same tropes as its parent game. Tropes unique to the game itself include: