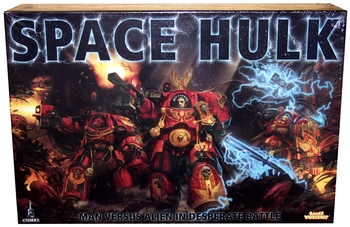 Space Hulk is a Board Game by Games Workshop, currently in its third edition.

In the Warhammer 40,000 universe, space is very much an ocean, complete with ghost ships drifting silently through the void. These ships, known as Space Hulks, are both prized and feared by the Imperium of Mankind: prized, because their ancient holds often contain artifacts of lost technology and relics of the long-forgotten past; and feared, for their dark and twisting corridors often hide unseen threats and lurking horrors. Among the greatest of these horrors are the Genestealers, the vanguard organisms for the Tyranid Hive Fleets. While each Genestealer is an alien killing machine with claws that can shred the toughest of personal armor like it was tissue paper, their true threat lies in their reproductive cycle, which transforms the victim into a willing pawn of the Genestealer as well as turning all their future children into Genestealer hybrids; suffice to say that even a single Genestealer, if left unchecked, can spell the doom of an entire world. Thus it falls to the Space Marines, humanity's greatest warriors, to board any Space Hulk that drifts into an inhabited system and cleanse it with shell, fire, and blade — or die trying.

The game draws heavy influence from the movie Aliens, with a small team of heavily-armed specialists attempting to accomplish their objectives while under attack from endless waves of killer alien bugs. Three editions of the game have been released; the most recent (a limited edition released in 2009 and re-released in 2014) focuses on the Blood Angels chapter of Space Marines and their efforts to cleanse the Space Hulk Sin of Damnation.

Has five official video game adaptations released to date, one simply named Space Hulk that focuses on the Dark Angels, and Space Hulk: Vengeance of the Blood Angels which focuses on the eponymous Space Marine chapter; they differ from the board game by being in Real-Time with Pause. The third one, also entitled Space Hulk, was released on PC/MAC/iOS in 2013. Official Website Here.

An expanded remake of the 2013 game entitled "Space Hulk: Ascension "

was released in late 2014. Yet another adaptation, Space Hulk Tactics, was released in 2018, supplanting the two previous games and forcing them to be removed from sale.

A 2016 adaptation called Space Hulk: Deathwing, an FPS, was developed by Streum On Studio.

There is also a free game Alien Assault, which was previously a fan-made Space Hulk adaptation which was more faithful to the tabletop game, but the copyright conflict with Games Workshop forced the creator to change the setting. But the game is mod-friendly, and the fans very quickly converted it back into the Space Hulk game.

Has nothing to do with The Hulk In space! For that, see Planet Hulk. Or to his Multi-Armed and Dangerous alternate universe counterpart from the Space: Punisher series whose Fan Nickname is Space Hulk.

The tabletop game contains examples of the following tropes:

The videogames contain examples of the following tropes: