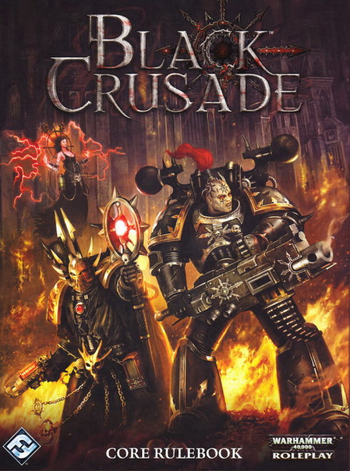 The intoxicating lure of Chaos leads untold millions down the path of corruption, and the noblest of intentions offers little protection against its dark influence. A soldier’s bloodlust, a politician's ambition, a lover’s desire, and even a mother’s whispered prayer over her feverish child – they are all the playthings of the Dark Gods. Why resist? Wealth, power, and happiness await those who serve the Ruinous Powers, and the only price is your humanity.
Advertisement:

is the fourth in a series of tabletop roleplaying games set in the Warhammer 40,000 universe. While its sister games Dark Heresy, Rogue Trader, Deathwatch, and Only War focus on characters that are (at least outwardly) loyal to the Imperium of Man, Black Crusade focuses on characters who serve the dark powers of Chaos — the heretics, the madmen, the lost and the damned. The game contains rules for playing both Chaos Space Marines and human cultists, with starting characters roughly equivalent in power to mid-level Dark Heresy characters or low-level Rogue Trader characters.