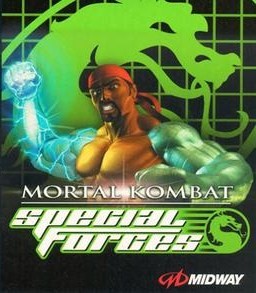 ...And since when was Jax a pirate?
Who's the Kombatant that won't kop out
When there's danger all about?
JAX!
Right On!
Awwww yeeaaahhhh...
Advertisement:

Mortal Kombat: Special Forces is an action game released for the Playstation in 2000. A spin off of the popular Mortal Kombat fighting series, the game revolves around Jax and his quest to avenge the deaths of his special combat unit at the hands of the Black Dragon.

Taking place before the events of the first Mortal Kombat, the game begins with Black Dragon leader Kano breaking his gang out of jail and Jax out for revenge. Soon Jax discovers that they're after the "Eye of Shitian", a powerful relic and aims to stop them getting their hands on the artifact.

The game suffered development problems, including half the original Midway team leaving (along with series co-founder John Tobias), the story being rewritten halfway through and being rushed out to release.

They say this cat Jax is a bad mother-
SHUT YOUR MOUTH!
But I'm talkin' 'bout Jax, not this game.
THEN WE CAN DIG IT!