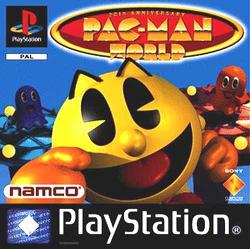 It's Pac-Man in 3D.
Advertisement:

Just as Mario jumped to the third dimension during the fifth generation of video gaming, so did Pac-Man (though the games themselves play more like Crash Bandicoot). The first game, Pac-Man World, was released on the Sony PlayStation on his 20th anniversary.note Almost. It was released in 1999, one year short of his actual 20th Anniversary. Instead of the maze game he was most known for, this game was a rather standard Platform Game incorporating many Pac-Man motifs in new ways such as fruit to unlock doors and pellets which could be shot as lasers. However, mazes were incorporated into the levels and there's even a mode featuring them exclusively. Though this game isn't anywhere near as prominent or influential as the iconic arcade game or Super Mario 64, it retains a cult fanbase and even spawned two sequels, a spinoff starring Ms. Pac-Man, and a kart-racing spinoff all in the sixth generation.

One of the more trivial details of the game is that, like Pac-Man Arrangement before them, the three platformers consistently mix up Blinky and Clyde, with the orange ghost becoming Blinky and the red one becoming Clyde (a mistake that World Rally fixed). To avoid any further confusion, they will be referred to by the incorrect names given in these games, rather than the proper ones that the rest of the franchise uses.