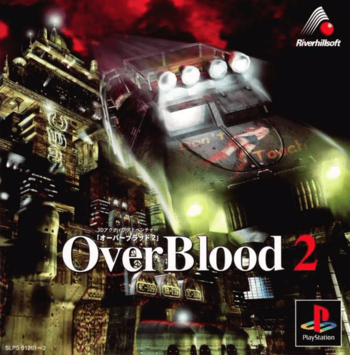 OverBlood 2, was released in 1998 and had a lot of similarities to a certain game released a year earlier. The Hero is Acarno Brani, who traveled to the city of East Edge in 2115 to become a "Junk Blader." Since the events of the first game, the Earth has become a boiling furnace that is only habitable due to massive cooling devices. He tries to save an old man at the airport from being robbed and ends up becoming involved in a sinister conspiracy revolving around a mysterious capsule. It was released only in Japan and Europe, with certain copies containing a Game-Breaking Bug that made it impossible to finish. It also has it's own fan made website.