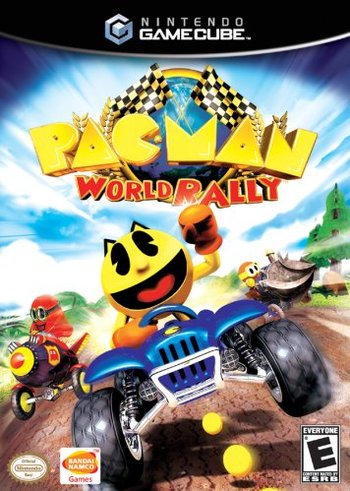 If Ridge Racer can't get enough Wacky Racing...
Much like how the original Crash Bandicoot trilogy was followed by a racing game, the Pac-Man World trilogy is followed with this game. Pac-Man World Rally is the first Pac-Man racing game outside the Ridge Racer games, released for the PlayStation 2, PlayStation Portable, Nintendo GameCube and PC. An Xbox release was planned but cancelled. It mixes Wacky Racing with Pac-Man elements like the presence of Pac-Dots and fruits. Many of the racetracks featured may include references to the past Pac-Man games, as well as other Namco works. Speaking of the latter, there are even playable characters that originated from said non-Pac-Man games/franchises.
Advertisement:

This would end up becoming the last installment in the World series of games until a remake of the first game was announced in 2022.

Features characters and elements from: