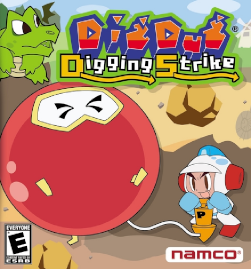 Killing stuff with an air pump since 1982.
"In the early days of coal mining, it was dirty, dangerous work, as seen in this sad footage. We lost a lot of good men to inflatable dragons."
— Stephen Colbert
Advertisement:

Dig Dug is a Digging Game by Namco, first released as an Arcade Game in 1982. The objective of the game is for your player (initially just named "Dig Dug", but later changed to Taizo Hori) to dig underground and eliminate all of the monsters on each stage using a special pressure pump to inflate them to bursting. You can also dig out the dirt beneath buried rocks to drop them on enemies. There are two types of foes: Pookas, somewhat harmless round things that bounce around and go about their business, and Fygars, dangerous dragons that can breathe fire. The further down you are when you kill one, the more points you'll receive. Throughout each level, you'll sometimes come across vegetables that will boost your score. The enemies can turn into ghosts and slowly work their way through the dirt to close in on you.

A few sequels have been released (Dig Dug II, the PC-only Dig Dug Deeper, Dig Dug: Digging Strike, and Dig Dug Online) as well as a spinoff series in Mr. Driller. Taizo himself appears in two ShiftyLook properties, Namco High and Mappy, oddly still being referred to as Dig Dug.

Taizo Hori himself appears in the turn-based strategy RPG Namco × Capcom, his backstory portraying him as a retired soldier who now works as a Digger. His ex-wife, Toby "Kissy" Masuyo from Baraduke (who is teamed up with Burning Force's Hiromi Tengenji), is also playable in the same game, still apparently holding a grudge against Taizo. The characters are respectively voiced by Toshio Furukawa (Taizo), Yuko Mizutani (Toby), and Chisa Yokoyama (Hiromi).

Has nothing to do with Diglett or Dugtrio.