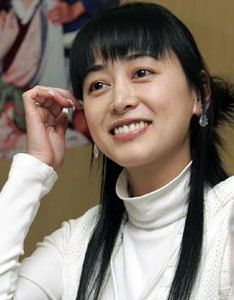 "Be careful not just of influenza, but also cars."

Chisa Yokoyama (born December 20, 1969) is a veteran seiyu who is also a genuine anime fan herself. She tends to voice Yamato Nadeshiko or Cool Big Sis roles, sometimes tended to be Hot-Blooded like Subaru in Nadesico. At the start of her voice acting career, she worked with Arts Vision before she established her own agency known as Banbina. In high school, Chisa briefly worked as an assistant employee in Jump Broadcasting Station.

In August 2009, she suffered an accident while riding a scooter. A car hit her hard and Chisa earned broken bones. Thankfully, they healed, and this caused her to say that quote of hers in her blog. In November 2009, Chisa announced her marriage to Chaka from the band Tripolysm.

She currently has one child, a daughter who was born on September 2014.

Chisa's blog can be found here

Chisa Yokoyama and her works provide examples of: