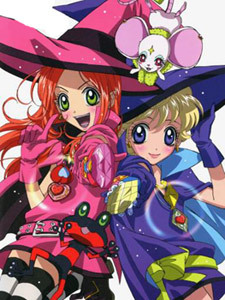 Sugar Sugar Rune is a Magical Girl series. Originally a manga by Moyoco Anno which was serialized in Nakayoshi from 2004 to 2007, it was adapted into a 51-episode anime in 2005.

Chocolat and Vanilla are two young witches from the Magical World, the best of friends despite being polar opposites. They're both chosen as candidates to become the Magical World's future queen. But in order to prove themselves, they must venture into the Human World and collect "hearts" - extracted human emotions representing how a person feels towards you. Whoever captures the most shall become queen.

They're aided by their mentor, the witch pop-idol Rockin' Robin; their familiars, Chocolat's lazy frog Duke and Vanilla's stuck-up mouse Blanca; and later, their friends from the Magical World, Houx and Saule, who transfer to their school in order to protect them.

But competing for hearts isn't all they have to deal with. Something evil is drawing near the Queen Candidates- the mysterious middle school boy Pierre, prince of the Ogres who wants the Noir hearts for himself and has taken an interest in Chocolat. It is thus up to the girls to stop his Evil Plan- but Chocolat finds herself interested in him as well.