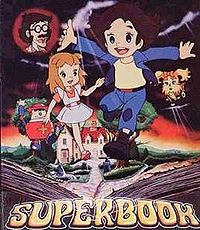 This Book is fun!
Advertisement:

Super Book, or Anime Oyako Gekijō ("Animated Parent and Child Theater") in the original Japanese, was a Japanese-American tag-team effort to try to show stories from the Old and New Testament of The Bible to Japanese children. Released from 1981 to 1983, commissioned by Pat Robertson's Christian Broadcasting Network, and produced by Tatsunoko Production (although the actual animation production was farmed out to other studios, including Studio Shaft) for TV Tokyo, although it was aired on affiliates of all of Japan's major television networks except NHK.note In 1981, the TX (TV Tokyo) network didn't yet exist, and even today has only a handful of affiliates, so the series was usually shown outside Tokyo on affiliates of other networks or on independent stations, in some cases on a delayed basis. Originally, it was intended solely as an evangelistic tool to introduce Japanese viewers to Christianity, but a positive response at a French convention led to an English dub in the United States of America and dubs in many other languages, becoming perhaps one of the most widely distributed Japanese animated series ever, even if it isn't often thought of as "anime" despite its origins. Although it was syndicated in the U.S., most American viewers probably saw it on CBN Cable, where it ran alongside other anime series such as Honey Honey and the original English dub of Mazinger Z.

The series focuses on the adventures of Christopher (Chris) Peeper and his best friend Joy. During the first episode, Christopher's father, an eccentric college professor who seems to specialize in Biblical archaeology, tells Christopher to clean out the attic, as it has gotten severely cluttered and messy. While Chris and Joy are working on the attic, some boxes fall over, and a strange book falls out of one of them.

Taking the book to Chris's bedroom and failing to open it on their own, Christopher and Joy are startled to see a blinding light coming from it as it opens itself. Things then get even stranger; the book starts talking to them, identifying itself as the eponymous Super Book. The book explains that it contains many stories inside, and that they need only peer into it to experience them.

Thus begin Chris and Joy's adventurers. Once an Episode, they travel within Super Book to experience one of the Biblical stories it contains, accompanied by Chris's toy robot Gizmo, who becomes a fully functioning robot during their adventures. Though they often interact with the Biblical characters themselves (they try to stop Abraham from sacrificing Isaac, Cain from killing Abel, etc.), they primarily observe the stories, learning from them the lessons each tale has to teach.

Surprisingly, in a nation where Christianity is a minority religion then as now, the show was popular: the two Superbook series as well as sister series Flying House attracted high ratings during their original broadcast runs and were rerun on TV Tokyo continuously through 1986. CBN claims the show attracted more than eight million viewers in Japan at its peak.

The second series (Superbook II, or Pasokon Travel Tanteidan) took place two years after the first and had Super Book accidentally fall on a computer keyboard. This somehow transferred Super Book's powers to the computer, allowing anyone who wanted to see into the past. Unfortunately, Chris' dog Ruffles accidentally gets lost in time in the process. To find her, Chris' cousin Uriah (Uri for short; Sho's brother Yuu in Japanese) and Gizmo (now a fully functioning robot even outside Super Book, with a built-in computer for recall purposes) regularly travel back in time to find her, adding an overarching plot arc to the second series. There is, however, much less interaction between the protagonists and the Biblical figures than in the previous series; the show focuses more on Plot Parallels, going back and forth between Uri and Gizmo's quest and the Biblical storylines with little intersection between them.

In between the two series of Superbook, there was also a third, separate series called Flying House that focused more on stories from the New Testament, primarily the ministry of Jesus Christ.

Most of the tropes that apply are tropes from The Bible. The ones listed here focus primarily on the original cast, the series, its premise, and any other characterization tropes not on The Bible page.

In 2011, a computer-animated reboot of the series was produced. The remake is notable for being the first animated series to air on ABC Family (who aired the original back when they were known as CBN Cable in the early 80's) since around 2005. Interestingly, the reboot has also begun airing in the nation where it all started - Japan - as of early 2018. Meanwhile, the original series can still be found on Trinity Broadcasting's Christian kids' channel Smile Of A Child (but in the wee morning hours - better prepare your DVR!note Only if you live in parts of the US and have AT&T U-Verse TV.).

Compare to The Kingdom Chums, which also features time-traveling children (one of whom is Jewish) witnessing Bible stories and was also animated in Japan (though the chief production staff were American and thus it isn't considered "anime"). Compare also to the early Imagination Station installments of Adventures in Odyssey, which more directly involved the participants in the story.