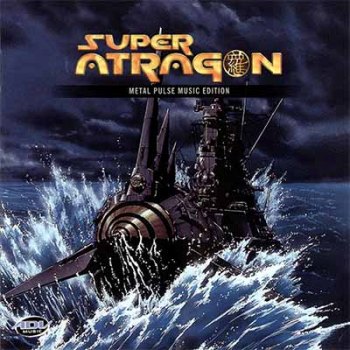 Super Atragon (Shin Kaitei Gunkan) is a two-part anime OVA made in 1995, with a total running time (excluding credits) of a little over 1.5 hours. It centres on a Phlebotinum-powered submarine-battleship named the Ra. It has the same plot premise as the old Japanese Sci-Fi Tokusatsu movie Atragon (Kaitei Gunkan), and the two novels that it was based uponnote The Undersea Warship by Shunrō Oshikawa and The Undersea Kingdom by Shigeru Komatsuzaki. It could be seen as a Humongous Mecha show as it uses many of the genre's tropes, but with a Dieselpunk battleship instead of a robot.

The show opens with a prologue scene depicting the Ra in 1945, under the Imperial Japanese flag, engaging in a broadside match against an American submarine-battleship, the Liberty. After which we have the opening credits, and then the action skips to present day Antarctica, where a mysterious black object is rising from the ice and an expedition is sent to investigate.

They discover that an advanced race of subterranean dwellers tested humanity in 1932 with two sources of power and two emissaries. For decades the emissaries lay in a coma, but now they have awakened, and one of them has decided that humans have failed the test and must be exterminated. War machines of devastating power have risen around the world; and humanity's only hope is the Ra, rebuilt in all of its big-gunned glory, with a bombastic soundtrack to match.