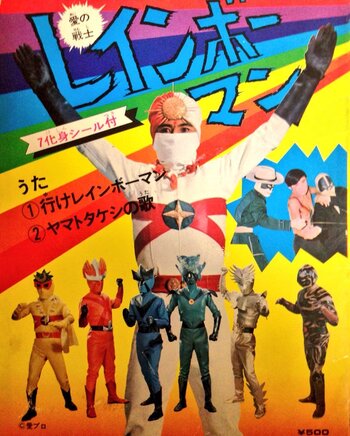 Warrior of Love Rainbowman is Toho's first toku show that aired in 1972-1973. The show ran for 52 episodes. It was created by Kohan Kawauchi, who is also responsible for the first tokusatsu, Moonlight Mask.

The toku series began with Takeshi Yamato, a pro wrestler who goes to India to learn discipline from the old sage Daibadatta. When Daibadatta trains him, he gives Takeshi Yamato the Henshin Hero abilities that allow him to transform into Rainbowman. He has seven different forms, each based off a different element and day of week. He goes back to Japan and finds out a racketeer wants to hustle his coach, and friend runs into a Racketeer, who wants him to go to Macao, to do a wrestling match. When he goes to Macao he meets Mr. K, a foreigner so bent on revenge he wants to destroy Japan, and leads the Shine Shine Dan (literally Die Die Army). He makes it his goal to stop them.

The series was successful enough to receive a 1982 anime remake, which replaced the title hero with a robot named Rainbowman, who was piloted by Takeshi Yamato.

Warrior of Love Rainbowman provides examples of the following tropes: