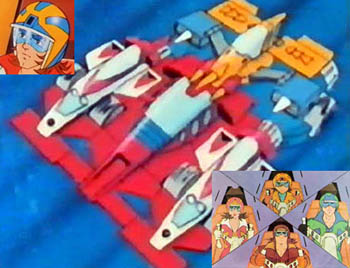 Sure, there are drivers, but we know who's the real star of the show.
Advertisement:

Supercar Gattiger (Known as Cho Supercar Gattiger in Japan) is an anime series created by Hitoshi Chiaki (inspired by the manga Hideharu Imamites), and produced by Wako Productions. The show consisted of 25 episodes and was broadcast by Channel 12 Tokyo between October 1977 and March 1978.

The series begins when Professor Kabuki unveils his newest creation: the Gattiger, an amagamation of five vehicles powered by his breakthrough Solar Energy Engine. During the conference, he also names the five drivers for the prototype, and reveals that a criminal organization called the Demon Empire is after its secrets. Professor Kabuki is murdered soon afterwards, and his son, Joe Kabuki, discovers that his thought-to-be-dead mother is somehow associated with all of this.

With the support of Dr. Waitazuki and the other four members of the Tiger Team, Joe must now travel the world and compete in races under treacherous conditions to solve the mystery, all while stopping Emperor Black Demon and his Demon Empire from stealing the Solar Energy Engine and conquering the world by monopolizing solar power. Each Gattiger Machine is a formidable race car with various abilities; in more desperate situations, the Tiger Team can combine their vehicles into Gattiger, an unstoppable 300mph solar-powered juggernaut.

Subbed versions were broadcast on the west coast of the United States and in parts of Europe. The show was fully dubbed in Italy, which doubtlessly contributed to its popularity there.