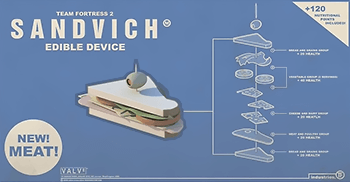 And now you know how a sandvich works. note  Larger version here.

◊
Skulduggery Pleasant's car was a 1954 Bentley R-Type Continental, one of only 208 ever made, a car that housed a six-cylinder, 4.5-litre engine, and was retro-fitted with central locking, climate control, satellite navigation and a host of other modern conveniences. Skulduggery told Stephanie all of this when she asked. She'd have been happy with, "It's a Bentley."
— Skulduggery Pleasant by Derek Landy
Advertisement:

Animators love machines (except the ones that only like airplanes). If a series has any kind of Bonus Material, you are very likely to find whole pages devoted to detailed diagrams and blueprints of Props and items used in said show. These can be as long as character biographies, and some end pages are specifically filled with this kind of information. For some series, this information is frequently All There in the Manual.

If a show has the budget, this will even extend to the depiction onscreen. Even when objects might not behave in a realistic way or are slightly souped up versions of real machines, they will certainly look accurate. Similarly, any show taking place in the present will feature technology right up to date to the time of the show's production (e.g., USB drives or Memory Sticks instead of Magic Floppy Disks). If the obsession is extreme, there's usually a character who is an otaku about the subject, and a good chance that character is an Author Avatar.

Its real origin is the cutaway drawings of airplanes in popular magazines during the Second World War, which were imitated in the British comic Dan Dare as centerfolds of spaceships.

Humongous Mecha series take this to the extreme, where it becomes a kind of Fanservice; a Real Robot is almost expected to have Schematized Props. This also extends to weapons seldom being neutered onscreen. Swords have a deep heritage in the country, and guns are much more difficult to get in Japan.

Of course, this is endemic to any science-fiction series which might attract Geek fandom; Star Wars, Star Trek, even many Comic Books. For example, an entry in the Official Handbook of the Marvel Universe describes Spider-Man's webshooters: Because the fluid almost instantly sublimates from solid to liquid when under sheer pressure, and is not adhesive in its anaerobic liquid/solid phase transition point, there is no clogging of the web-shooter's partsnote Sublimation refers to a solid/gas transition, such as when dry ice turns into carbon dioxide gas, and shear pressure (with an A) is pressure applied at an angle. If only Stan Lee could have worked the phrase "anaerobic liquid/solid phase transition point" into Spidey's first appearance, imagine how well it would have sold!

Remember; this has only a stylistic similarity to Shown Their Work. It is actually the blueprints of Minovsky Physics adhering substance.