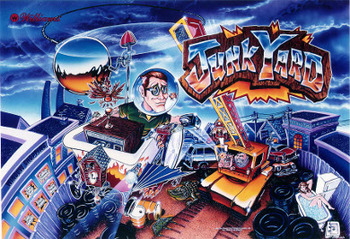 It's not hard to play in the yard.
The meanest game in the whole darn town.
Advertisement:

Junk Yard is a 1997note though prototypes were around in December of 1996 pinball machine made by Williams Electronics. It was designed by Barry Oursler and Dwight Sullivan, while Paul Barker and Pat McMahon provided the art. Unsurprisingly, it takes place in a junkyard, where you collect trash to build a flying jalopy to ultimately head into space and fight Crazy Bob. Along the way, you'll make a toaster gun so you can save the girl from the Angry Guard Dog, take a ride on the Magic Bus, and hop for a spin in the Time Machine to start a mode from an earlier Williams title.

Yeah, it's that kind of game.

Junk Yard was the final pinball game from veteran Williams designer Barry Oursler. He was laid off early in the project, leaving Dwight Sullivan to complete the game. The table was available as part of Season 3 of The Pinball Arcade before the license to all Williams and Bally tables expired on July 1, 2018. However, on September 4, 2018, Zen Studios announced that it had gained the rights to this and other WMS tables to be released within Pinball FX3. In particular, this and three other tables (Fish Tales, Medieval Madness and The Getaway: High Speed II) are the first to get this treatment, with others to follow.

Crazy Bob: "Get out of my junkyard!"