Pinball / Tales of the Arabian Nights 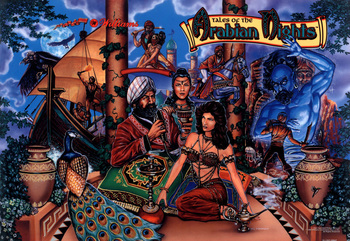 A big blue genie with a beard? You mean this one?
Narrator: "In ancient Baghdad, a most beautiful princess was imprisoned by the evil genie Saleem Bagazi..."
Advertisement:

Tales of the Arabian Nights is a Physical Pinball Table designed by John Popadiuk with artwork by Pat McMahon; it was released by Williams Electronics in 1996.

The game centers around an evil blue genie (Saleem Bagazi) who has kidnapped and imprisoned an Arabian princess; the player is her betrothed, who valiantly sets off to rescue her. With his enchanted scimitar, Aladdin's magic lamp, and his own benevolent jinn, the player must venture into the seven Tales of the Arabian Nights and retrieve a magic jewel from each one. Rub the lamp for magical power, sneak through the harem, and visit the bazaar for useful treasures, but be on the alert for the genie's fireballs. If the player manages to get all seven jewels, he can fight through the genie's skeletal warriors before confronting the scoundrel in a fast-moving battle for the princess.

Tales of the Arabian Nights was designed to draw in beginning and intermediate players, which is subtly reflected in its playfield design and rules. There are only two flippers, one ramp, and a half-dozen key targets (the genie and five "Golden Symbols") that are essential for the player to focus on. Furthermore, most of the seven magic jewels can be collected with as little as two shots, and players could often use a "magic Wish" to skip the Tale and immediately collect the jewel. On the other hand, some elements keep even experienced players on their toes, such as the spinning magic lamp that can send balls in unexpected directions. As such, Tales ended up as the second-most popular pinball game of 1996,note behind Scared Stiff and remains a perennial favorite among many players.

Digital versions of this table are available for Williams Pinball Classics by Encore Inc. and The Pinball Arcade by FarSight Studios, the latter of which provided this table completely free. Following the removal of the Bally/Williams tables in July 2018, Mary Shelley's Frankenstein has replaced Tales of the Arabian Nights as the free table. It later reappeared in Pinball FX 3, as paid DLC for Volume 5.

Tales of the Arabian Nights demonstrates the following tropes:

Genie: "I challenge you to another game!"