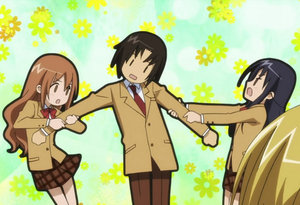 Most guys would give anything to have the girl of his dreams literally want a piece of him.

But it can get painful if more than one girl wants that to happen.

This classic Harem Anime scene consists of each young lady in this tug of war grabbing an extremity (usually an arm) and literally trying to take her man away from her rival(s), in a grotesquely hilarious exaggeration of wish fulfillment. The girls in competition will likely shout this:

The poor guy in question is effectively Made of Iron for the duration of suffering under this trope, especially when the contestants have Super Strength.

This trope is unrelated to Love Hurts, even though it may hurt literally.

This trope also shows the chivalrous side of a guy — he Wouldn't Hit a Girl even to protect himself from this trope. For this reason, a girl is rarely fought over this directly in Distaff Counterpart harems.

See A Lady on Each Arm for the less violent version of this trope. Cock Fight is a rough Spear Counterpart.