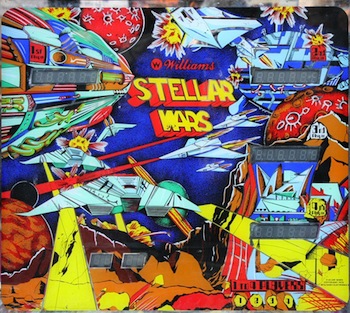 Stellar Wars is a pinball game designed by Steve Ritchie and illustrated by Constantino and Jeanine Mitchell. It was released by Williams Electronics in 1979, and is noted for being the first game Ritchie created for Williams.

Riding the popularity of science-fiction media in The '70s, Stellar Wars depicts a space battle between two sides over an unspecified planet. From the cockpit of your Space Fighter, shoot the various targets and repel the invading fleet. Hit the center targets to increase the Eject Hole value for an Extra Ball, hit the right targets to raise the values of the Spinner and the Captive ball, then shoot the left targets and go after the bumpers. Nudge the table to roll over the WARS inlanes, then spell STELLAR WARS and watch the Battlescope explode in a frenzy of firepower.

Although Stellar Wars is not a particularly deep game, it's endearing for its reliance on technical skills — players are rewarded for their patience and aim, making it a great game to practice basic pinball playing techniques. While it lacks the speed and flow that Steve Ritchie's later games are renown for, it's still regarded as a solid title with smooth shooting action. The one thing that sinks this game are the visuals; shoddy artwork, amateurish design, and garish colors make it look like a childish production.