Locking MacGyver in the Store Cupboard 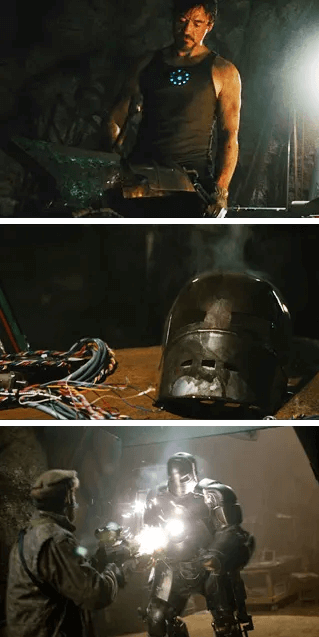 IN A CAVE! WITH A BOX OF SCRAPS! A Superhero Origin as good as any.
"How stupid is the Fire Nation? They surrounded Earthbenders... with rocks. That's... like locking Popeye in a cage of spinach!"
— JesuOtaku, reviewing The Last Airbender
Advertisement:

Half the time when good guys get locked in a cell, all of the equipment that they need to escape is in the cell with them. Bedsheets are a favorite for this MacGyvering technique.

When the improvised equipment is awesome enough to deserve screen time of its own, a Forging Scene is inevitably preceding its unveiling. If multiple team members work together, it's an A-Team Montage.

This entry was inspired by the MacGyver episode "The Road Not Taken", where MacGyver and his Girl of the Week (actually one of his many ex-girlfriends) were locked in a building somewhere in Southeast Asia and the room contained everything they could possibly ask for to make an escape and beat the bad guys.

If the scene is tailored for a character's specific skills, it is This Looks Like a Job for Aquaman. See also Nice Job Fixing It, Villain.