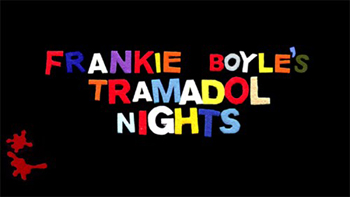 A less offensive title.
"This show contains uncompromising adult humour and language right from the start which some viewers will find offensive."
— Continuity Announcer.
Advertisement:

Frankie Boyle's Tramadol Nights is the first solo series from the razor-sharp Glaswegian comic Frankie Boyle, it blends acerbic stand-up with hilarious sketches crafted in the darkest recesses of the human psyche...

Confirmed for 6 episodes on Channel 4.