Literature / Five Children and It 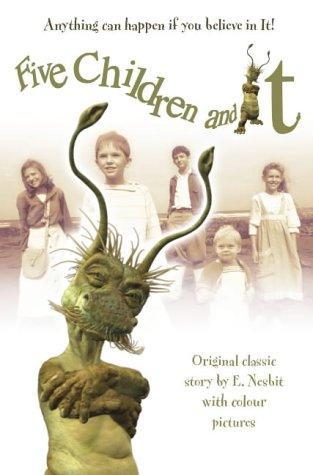 Five Children and It is a novel by E. Nesbit first published in 1902.

Five siblings—Cyril, Anthea, Robert, Jane, and their baby brother "the Lamb"—are looking forward to a dull summer in the English countryside when they unexpectedly discover It. "It" is the Psammead, an ancient and deeply grumpy and sarcastic sand-fairy with the power to grant wishes. Unfortunately, the Psammead has been sleeping at the bottom of the local gravel-pit for several millenium now, and his wish-granting powers are rusty. All he can manage is one wish per day, to be shared among all five children, with all wishes to vanish promptly at sunset. Even this turns out to be far too much as every wish turns into an unexpected disaster.

It had two sequels: The Phoenix and the Carpet (1904), in which the second-hand carpet bought for the childrens' nursery turns out to be a Flying Carpet with the egg of The Phoenix rolled up in it, and The Story of the Amulet (1906), in which the children obtain an ancient Egyptian amulet that gives them to power to travel through time.

The Phoenix and the Carpet was adapted for BBC TV in the 1970s.

Five Children and It and The Phoenix and the Carpet were adapted for BBC TV in the 1990s, with scripts by Helen Cresswell. There was also The Return of the Psammead, a new story by Cresswell in which a new group of children met the Psammead.

An anime version was produced by TMS and broadcasted by NHS in 1985-1986- It was named Onegai! Samia-don ("Please, Mr. Psammead"), and had 78 episodes, setting the story in the English countryside of The '80s.

A Film of the Book of Five Children and It was released in 2004, with Eddie Izzard as the voice of the Psammead.

In 2012, Jacqueline Wilson published Four Children and It, in which four modern-day children meet the Psammead. An adaptation called Four Kids and It was released in 2020 with Michael Caine as Psammead and Russell Brand as the scheming Uncle Tristan Trent.

Not to be confused with It (which is about seven children and a totally different It).

Five Children and It provides examples of:

The Phoenix and the Carpet provides examples of:

The Story of the Amulet provides examples of:

Four Kids and It (the 2020 televised version) provides examples of:

Alternative Title(s): The Phoenix And The Carpet, The Story Of The Amulet