Film / Are We There Yet? 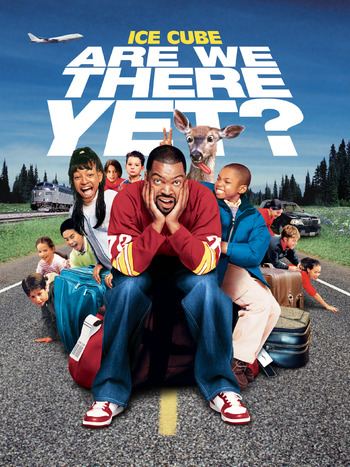 Are We There Yet? is a 2005 comedy film about Nick Kingston (Ice Cube), a swinging bachelor who falls for Suzanne (Nia Long), a beautiful businesswoman and divorced mother with 2 bratty kids, Lindsey and Kevin. Suzanne has to go to a business meeting in Vancouver and asks Nick to bring her kids. But her two kids do not like Nick and purposefully sabotage their trip in order to split Nick and Suzanne apart. Throughout the trip, Nick and the kids clash repeatedly, but end up bonding.

The film was followed up by a sequel Are We Done Yet?, where he and the family move to a new house in desperate need of repair, and spun-off a TV series also named Are We There Yet?, set in a different continuity and with different actors. The show has Nick (now played by Terry Crews) as a successful sports talk show host with the kids' bad behavior significantly toned down. His wife Suzanne's (played by Essence Atkins) bossiness and stubborn manner provides the greatest source of conflict within the show. Cube is a producer to the series, and has a role as Suzanne's brother.

Alternative Title(s): Are We There Yet