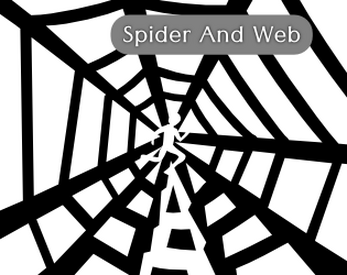 "Don't be absurd," he says. "You're no more a sightseer than the Old Tree in Capitol Square; and if you'd had enough sense to walk away from that door, you wouldn't be here. You don't and you didn't and are; we caught you. And you're going to start by telling me how you got through that door. Do you understand me?"
— The Interrogator
Advertisement:

Spider and Web is an independently written work of Interactive Fiction created by Andrew Plotkin, which won five of the 1998 Xyzzy Awards and was a finalist for four more. The story is told through a series of flashbacks by an Unreliable Narrator - who also happens to be the protagonist, an unnamed, captured spy, on an unknown mission against an unidentified country in the near future, and equipped with a wide variety of sophisticated tools.

The game may be found on the author's website

Spider and Web provides examples of the following tropes: