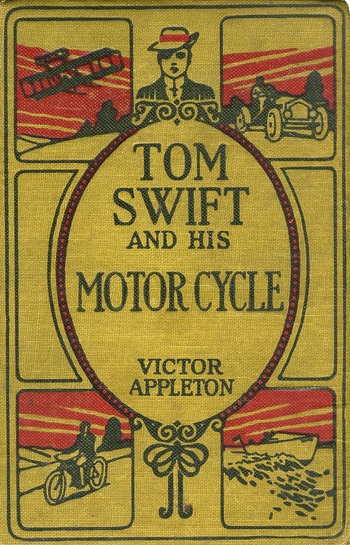 While popular in his time, Tom proved to have less staying power than his Stratemeyer stablemates Frank and Joe Hardy and Nancy Drew, perhaps because of how quickly his "cool technology" was superseded in the real world. An Atomic-age attempt to revive the franchise in the mid-1950s with a new series starring his son failed when people started questioning the wisdom of atomic-powered airplanes and automobiles. If anything Tom Swift Jr.'s Gee-whiz tech went obsolete even faster than his father's did.

The series was revived in the early 1980s, in Southern California in the 1990s and in the first person

Origin of the "Tom Swifty", such as "Pass me the shellfish," said Tom crabbily or "How was your colonoscopy?" asked Tom probingly. This is something of a Beam Me Up, Scotty! (or "Play it again, Sam") situation, as while Stratemeyer was eager to employ adverbs

and reluctant to use

As early as the 1910s, plans were made to adapt the books to live-action, but nearly every single one of them have failed, with progress being usually no further than a finished script. The only screen adaptation of the books in the 20th century is a 1983 television special called The Tom Swift and Linda Craig Mystery Hour, starring Willie Aames and Lori Loughlin and airing on ABC. A television pilot starring Gary Vinson was completed in 1958, but it was not greenlit because of legal problems. Tom's unlucky streak ended in 2022, as The CW ordered a series focusing on him (with Tom now being a gay African-American man), set as a spin-off of the network's ongoing Nancy Drew series. The luck didn't last long though, as it was swiftly cancelled. Despite CW announcing its cancellation five episodes in, they allowed the remaining five to air and finish out the run.