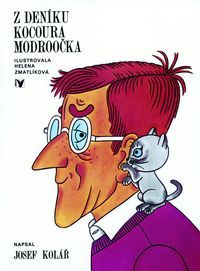 ... then my human put me on his shoulder and I was gently purring into his little ear...
Advertisement:

Blue Eyes is a little inexperienced Siamese tomcat with big blue eyes who decides to keep a diary and tell his readers what has happened to him since he was born, and continues writing about his adventures. Readers find out about his first days with his big two-legged creature (to whom he later refers as "my human" because cats don't have masters), about meeting other cats in his town neighbourhood like she-cat Green Eyes or gorgeous tomcat White Whiskers Rusty, about his adventures in the countryside cottage, about his encounters with various animals, and much more.

Written in 1965 by Josef Kolář, a biologist, teacher and radio journalist who wrote programmes mainly for children and youth. According to Kolář, the book was based on his real cat and his adventures. The book was illustrated by Helena Zmatlíková whose cute and charming pictures are a staple of Czech literature aimed at children.

It was adapted many times to various media: a radio broadcast, a puppet movie, live-action TV movie, several theatre performances, several audio books read by well-known actors, and an audio book narrated and sung by several actors and singers. Especially the last one was a huge hit when it was released, but none of the adaptations is so well-loved as the original book.