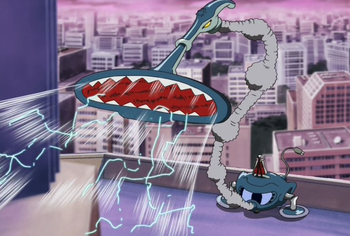 There's something about vacuum cleaners. Maybe it's the disproportionately loud shriek they make, Maybe it's the fact that the stuff that goes into them just disappears. Whatever it is, they're often seen as frightening by small children and pets in a way that other household appliances aren't.

So in fiction, they're often made out to be menacing, especially in works focusing on children or animals. In animated works especially, vacuum cleaners often display a much greater suction range and strength than real life vacuum cleaners could ever hope to achieve as well as the uncanny ability to suck up items far larger than could fit down their nozzles, rarely changing size no matter how much they consume.

Related to Weapons That Suck. Can be a part of A.I. Is a Crapshoot if the vacuum is robotic or Humans Are Cthulhu if it's an animal encountering the vacuum. If the vac captures a phantom, it's Ghosts Abhor a Vacuum. Not to be confused with Vacuum Mouth.