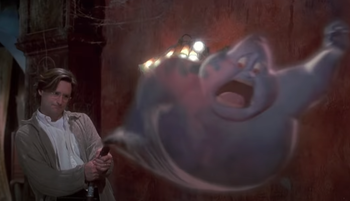 Sucks to be a ghost right now!
I am not afraid of you, fool! I fear only that infernal Poltergust 3000 you carry on your back! Stupid machine! But I am a KING among Boos! I swear it... I shall fear no mere house-cleaning device!!
— King Boo, Luigi's Mansion
Advertisement:

Ghosts are terrifying. They're murderous. They can't be reasoned with. They're unstoppable. No weapon you use on them shows any effect. No barrier you set up can keep them away. You're doomed.

And then you pull out your secret weapon. The one thing in the world that can stop an evil spirit.

Is it a magical sword, imbued with the power of angels?

A powerful talisman that can shine holy light?

No, indeed, it isn't remotely magical at all, and in fact can be found in at least one closet of most modern homes: The dreaded vacuum cleaner.

Apparently, ghosts, wraiths, genies, and other specters are simply floating lumps of conscious gas, and quite easily dispelled by vacuuming them up. Of course, with ghosts being intangible, how exactly they are unable to escape the vacuum again afterwards is often left unexplained.

Subtrope of Weapons That Suck. Compare Vicious Vac (which the vacuum certainly looks like from a ghosts perspective). Often seen as the weapon of choice for The Real Spoofbusters even though the Awesome Backpack and the vacuuming containment unit were separate tools in the original Ghostbusters.