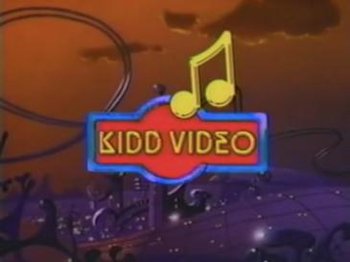 It's getting me going
It's keeping me moving on!
Hooked on my system,
I'm playing on and on!
People say I'm crazy,
'Cause I'm always on my own!
Hi-fi's around me,
Hi-tech just turns me on!
From my video to my radio!
— "Video to Radio", the series' opening theme
Advertisement:

This cult favorite originally ran from 1984-85 on NBC and produced by DiC Entertainment and Saban Entertainment (with Cuckoo's Nest Studio in season 1). It involved a Garage Band who were brought to a very strange magical land called the Flip Side by the evil Master Blasternote not to be confused with the Stevie Wonder song, or the villain from Mad Max: Beyond Thunderdome, or Blaster Master, for that matter. Master Blaster wishes to kidnap all the musicians from our world (it's never really explained why; perhaps he had hit upon the idea of using The Power of Rock for evil). The band escapes with the help of the good Fairy, Glitter, and the rest of the series involves them getting into adventures in every city and battling Master Blaster and his Copy Cats.

As with the Dungeons & Dragons (1983) series, they're also ostensibly looking for a way to get back to the real world... but not really. The fact that everyone in the Flip Side loves their music relieves the sting of Failure Is the Only Option.

Much, much more importantly, this series is remembered for being a truly glorious perfect storm of Rule of Cool, Deranged Animation, and The '80s. Mass quantities of The '80s.

The show was canceled for being too costly for NBC to produce.

Compare Jem. An extensive website, with episode guides, is maintained by Toolbot,

who has also been kind enough to upload several episodes

to YouTube. Which is good, because trying to describe the show is nothing compared to actually watching it.note That, and until the problem with the music is resolved, there may not be a home video release for quite a while...

Tropes appearing in Kidd Video include: