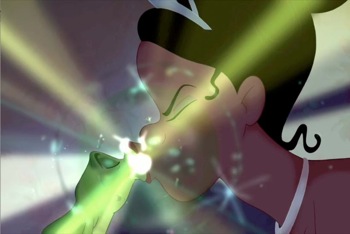 The Curse Escape Clause said that it can be broken by a kiss from a princess... so he should have found a real one.
Advertisement:

Some kisses are so sweet that they feel like magic, but some kisses really are magic. A Magic Kiss has some supernatural effect that either binds or releases a spell, for weal or woe.

While it's often used as an excuse for fanservice or ship teasing in modern works, chaste examples of fairy tale magic kisses are Older Than Steam.

Most of the examples of Magic Kiss fit into its subtropes:

Intimate Healing qualifies as a magic kiss if it isn't, well, more intimate; the literal examples of Kiss of Death may also be a magic kiss. Kissing Under the Influence could be the result of magic, but isn't magical itself. Compare Heart Beat-Down and Kiss of the Vampire.