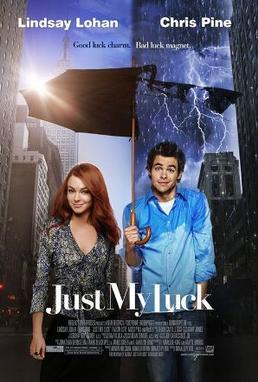 The movie about two people unintentionally switching their luck, with McFly!
Advertisement:

Just My Luck is a 2006 Romantic Comedy film directed by Donald Petrie and starring Chris Pine and Lindsay Lohan and was, apparently, supposed to be a vehicle to launch McFly's careers across the pond from their native UK in America.

One night Ashley, a woman (played by Lohan) with all the luck in the world meets, kisses, and somehow switches her luck with Jake (played by Pine), the unluckiest man in the world, at a masquerade ball. He's been trying to get McFly (Tom Fletcher, Danny Jones, Dougie Poynter, and Harry Judd, playing fictionalized versions of themselves) a record deal in New York City, but his extremely bad luck has always prevented him from doing so. Meanwhile, Ashley's luck has helped her a lot with her life, as she basically breezes through life, finding money on the ground, being able to talk a record executive into a deal with the company she works for with no prior experience in negotiating (just sitting in on meetings), and just being all around lucky. After their lucks are switched, both scramble to try to right their situations with the new luck-based hands they've been dealt.